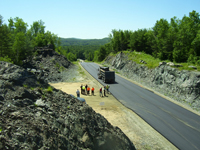 Our paving demo and open house on June 15, 2012 went perfectly, and we’d like to thank our customers who attended.

Paving with Warm mix turned out to be easier than conventional hot mix. We slowly turned the temperature down as the paving progressed and ended up at 50 degrees lower temp than normal. Instead of the mix being 325 as it dropped out of the plant it was 275. The crew laying the asphalt noticed the temperature decrease on the back of the paver and were pleasantly surprised at the lack of any smoke given off as they paved. The foreman even commented that he didn’t have to hold his breath when the loads were first dumped in the paver. We had a quality control person on the job testing the compaction density as the rollers worked. We achieved the desired compaction density range (92% to 97%) more easily than with conventional hot mix in fact after the first pass with the lead roller we were already in the range and had to be careful not to over roll with the finish roller.

Our final conclusion is that the benefits of using warm mix asphalt were delivered as promised. The modified asphalt binder that allows more workable mix at the lower temperature was more costly than the fuel savings of producing at the lower temp but the benefits of a cleaner and cooler environment for the workers and the ease of compaction still make WMA an attractive alternative. We will monitor the roadway to see how this pavement wears in comparison to the conventional paving that was done on Quarry Road last year.

Use our online Request a Quote form to get started with Blaktop on your paving project.

Visit our JOBS section.
You can apply online!